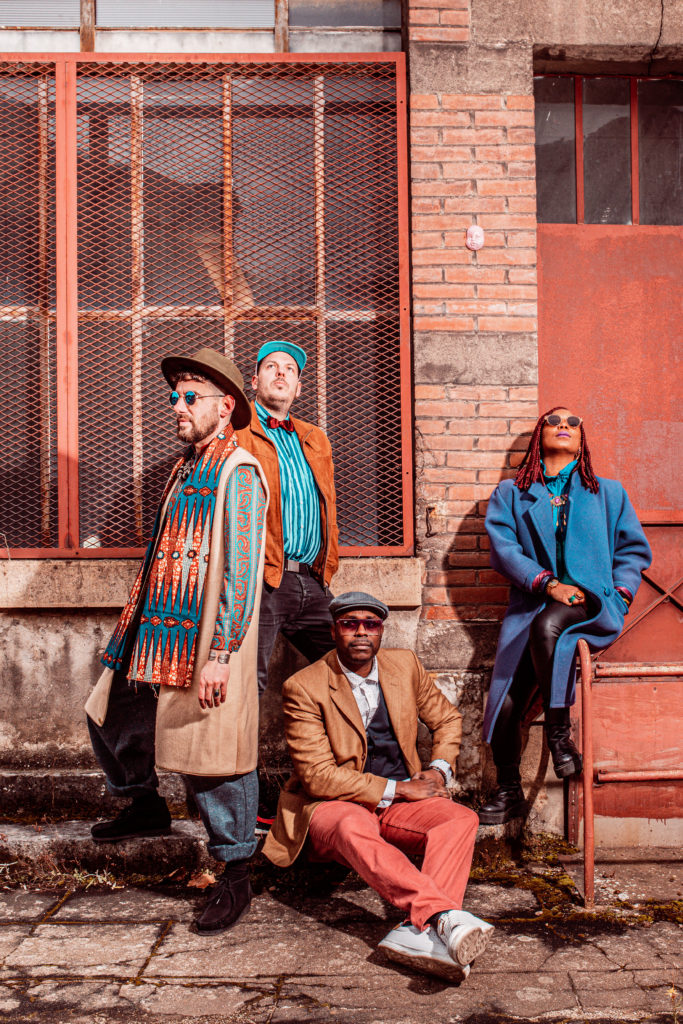 Based in Lyon with roots in Guadeloupe, Martinique and Armenia, the four-piece, self proclaimed ‘Creole Afro-Futurists’ Dowdelin spread the love with their addictive new foot shuffler Simé Love.

With their first new music since 2019’s Poul Wélélé EP,  Dowdelin return with their single Simé Love (Creole for Spread Love). Recently expanded to a four piece, the group mix fragmented electronic sounds and jazz with music from the French West-Indies; Gwo-Ka, Biguine, Quadrille and more. The song is the first offering from their new album Lanmou Lanmou, releasing in February 2022 on French imprint Underdog Records.

“Lanmou Lanmou” is fairly more straight-forward and song driven than “Carnaval Odyssey” was.” explains David Kiledjian “Also probably more dance-ready. I think that all those gigs, playing in front of people, made us understand better what we were doing with Dowdelin.”

Formed in Lyon, France by producer David Kiledjian and singer, Olivya, Dowdelin (a play on a Creole word meaning slow and idle) quickly hit their stride mixing Afro-Caribbean stylings, Creole-language vocals and more European sounding electronics. For Olivya, who is from La Martinique but grew up in France, the unifying of these styles immediately felt natural. Speaking to Bandcamp Weekly she said: “[I am from] La Martinique, my island … but I grew up in France. I don’t want to have to choose between the country of my birth and my country of origin.”

Featuring the singles Boaty Cruisy and Laissé Mwen, the group released their debut album Carnaval Odyssey in 2018. Dancehall, jazz and R&B were bundled in with gwo ka rhythms of Guadeloupe and electronic synths and vibes. Immediately infectious and with “boundary breaking beats” (UK Vibe), the group’s debut took them on the road, where they played across Europe including a host of UK festivals including Womad, Shambala and Love Supreme.

Now back with a fresh batch of songs and a new member, Dowdelin are set to take their Creole Afro-Futurism to the world once more.